Well I got pretty distracted and ended up not writing every evening like I had planned. Since I have several hours to kill at the airport while I wait for my flight to Taiwan, I’m going to play catch up now!

Wednesday:
I scheduled a tour of the Asakusa area with someone I found on the Meetrip.to website (I highly recommend them if you are traveling in the East Asia area!)

I managed to make a doofus of myself by messing up my directions. I got off of the train station at exit #9 when I was supposed to meet her at exit 1. Of course, I just kept plodding along. A few mishaps later, I found her and we went to Senso-ji temple which is riot outside of the train station.

Touching the lantern gives you luck! I also got to draw a fortune, and I got “the best fortune” – so I am saving that!

Had some fresh made melon bread (amazing!) and then walked around a few smaller (and less crowded) temples and streets. We settled on a lunch of ramen.

This was a broth based ramen, which means I have tried all three of the base ramen varieties. Broth, miso, and tonkotsu. My favorite has been the tonkotsu! 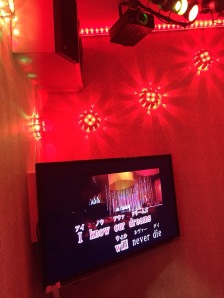 After lunch, we went to a place for karaoke. It was quite different from karaoke in the states! You rent out your own soundproof room by the hour. Ours had a killer sound system and flashing lights. You can also order food and drinks delivered to your room via your control pads. We had the room for two hours and it was a blast!

I was going to meet someone in Shibuya after this, but she ended up getting stuck at work, so I just went back to my room to sleep.

This was my geek out day! I finally got to go to the Studio Ghibli museum!!! Studio Ghibli could be considered the Walt Disney of Japanese animation… But I think they are better! Most well known films are Spirited Away and My Neighbor Totoro.

You have to purchase tickets a month in advance, and I was extremely thrilled to get mine when they went on sale last month! (They were sold out in half an hour!)

I traded my sticker for this amazing film strip entrance ticket upon arrival!

They don’t allow photos to be taken inside of the museum… But take how amazing that ticket is, and maybe you could get an inkling as to how magical the experience was! 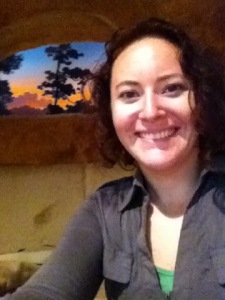 I was unable to resist sneaking a selfie from one of the special exhibits… I know, I’m terrible… But it was a LIFE SIZED CAT BUS! Yes, the inside was super soft and squishy! If you haven’t watched “My Neighbor Totoro”, I’m sorry, you just won’t understand.

After spending about 5 hours at the museum, I went to the train station to meet my evening guide.

She took me around the Meiji shrine and I learned a lot of new things from her about the history of the area! She also took me through one of the older, pre-WWII era, neighborhoods. Seriously my favorite tour! I didn’t get too many photos because I was too enthralled with listening!

I can guarantee that my lunch was cuter than yours!

It was great fun! I thought I might feel awkward, but I decided to just go with the flow and  enjoy the experience!
On guy was there by himself and was apparently embarrassed. When it was his time to get his photo taken with his maid, he looked like he wanted to run! I thought it was great fun and would definitely do it again!

Afterwards I met up with a fellow BJJ junkie to explore Akihabara. We ended up heading to Harajuku for shaved ice cream, and he approved!

He headed off to go get in line for the new Shoyoroll Gi release, and I headed off to the airport on the last train of the evening, arriving a little bit before midnight.

It turned out, I couldn’t check in to my 6 am flight until 2 1/2 hrs before departure. All of the outer lobby seats were taken, so I curled up on the tile floor behind a big plant and managed to sleep for a few hours until I was able to get checked in.

Now, I am wrapping this up because they are about to start boarding my flight! In just a few hours I will be in Taiwan for the first time! Apparently there is a typhoon going on so they are recommending we use the bathroom before boarding since we may not be able to move around on the flight. Sounds exciting!