Well, tournament was a blast! Ended up riding down with 4 of the guys (felt like such a player!) Good news is that it really saved a lot, splitting gas and hotel 4 ways. Bad news is that I had to listen to some pretty disgusting rap all the way there. Even I have my limit, and 4 hours of “whores and booze” music was it. Ha!

We arrived at about 11 pm. I took the couch and quickly passed out while the guys figured out who was spooning who.

I rolled over at 4 am when one of our guys got up to use the downstairs cardio equipment to lose his last few pounds. I passed out again and woke up at 6:30 to my alarm. My weight was good so I went downstairs for breakfast while the guys sat in the improvised sauna they made in the bathroom. Great eats! Oatmeal with fruit and nuts – and they had pineapple! Yay!!!

Every girl’s worst nightmare happened. I then discovered that my menstrual cycle decided to start that morning. And, of course, my brand new gi is blinding white! Good thing I brought black compression shorts!

We got to the venue at 8 – first division started at 9. Steven went to weigh himself and found he was still a pound over so he went out to jog. Got himself down to just right by the test scale then we all hovered to wait.

Turned out, the official scale weighed him a pound over – so instant DQ. He was severely pissed – as was my coach when I told him.

Next up was our purple belt Derick. He dropped about 20 pounds for this – and got down to 5 percent body fat. He only had two people in his division – and it was painful to watch both his matches. He says he learned a lot though! And he then gained 12 pounds in the next 24 hours.

Jason was up next in the blue belt masters division. He hadn’t competed in 2 years, and pulled his groin last week. He put up a good fight but lost both matches as well.

Our ultra-heavy blue belt also lost both matches, as did our big brown belt – both from an affiliate school.

So basically, the guys just circled up, and informed me it was up to me now. No pressure!

In the meantime, I’d been running around introducing myself to everyone with a Lloyd Irvin jacket, shirt, or patch. Think I scared a few of them until I told them I train with Shawn Hammonds – then it was welcome pats on the back.

Got to meet Master Lloyd finally. He makes me think of a big huge teddy bear – very nice – but I know he has claws and teeth in there!

My Matches:
I went two rounds. Tapped the first girl with an Ezekiel choke from mount. I like to put my feet on the hips when in high mount – works really well, but she bridged and my foot slid under her and she landed on my big toe. Hurt pretty bad – but I didn’t yell, just made a really ugly face (see pic below. Doc says 75 percent chance of a break)

Second round was the finals. Tough lady! Managed to sweep her twice and get mount each time, but ended up winning on points. She wore my grips out pretty well!

The ride back was long. The guys only listened to rap halfway before diving into their individual headphones. Got to sleep around 11.

I was a bit disappointed about only having 4 girls in my division. I told coach I’ll definitely drop to penna for Pan Ams – so I can have more rounds. He said I’ll probably have about 25 girls for that, and to not forget about Worlds in June. I said “right! Worlds! Sure!” – no pressure right? I’d better adjust my budget again… This is getting expensive!

That brings me back to training so far this week.

I didn’t roll too much on monday – toe slightly purple and all, but I just couldn’t quite stay off the mats. Came in, watched at 10, then did a massage during the 11:30 class. Then I went to work.

Tuesday was a bit more hands on. I rolled a bit at 10 – really went after it, then took class at 11:30 as well. We drilled working the mousetrap series, then sparred a bit. I went with Javi (purple neutron star) – he said he would only defend. Made me work! Love it!

After that I rolled with one of our pro fighters, Luke. He’s a solid wrestler for sure, but I’ve got a black belt in wiggle – so good match!

I ended rolling with Omar (purple spider). I got a good rolling lecture from him about always turning to face him if I’m in side control. After class he pulled me aside and put me through a few drills of frame, bridge into him, hip out, reguard, etc. Much needed. Gotta love the basics!

I scarfed down some black beans with salsa during no gi class. Then I drilled some more with Omar. He was trying to teach me a berimbola back take – apparently the inversion is the hard part, which I do easily. The kick is where I had trouble. Several of the guys were circled up trying to instruct me through it, so I kept at it. Honestly, I’d rather drill our de la riva x-pass. Don’t see myself really using that back take on a regular basis, although it is really cool looking and fun when you do it right.

That is all. Tomorrow is another day! 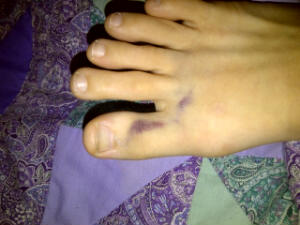 So here’s the cool thing we did. I paid a deposit for the little guy in the black on the end. I get to pick him up next Friday!