If you read my last update, you will know that I had determined I was going to be competing in the feather weight division for the first time ever. I’ve attempted the cut several times before, but always quit halfway through. I was determined, and when I hit that wall again this time, I told myself “No quitting. Make it happen.”

I was about a pound over when I arrived at the hotel on Tuesday. I wasn’t horribly worried about it because I didn’t compete until Friday. Dad flew in from New Hampshire to cheer me on, and surprised me with a visit to Disneyland on Wednesday! It is hard to be on a weight cut at Disneyland, but it is also hard to really be sad about it because, hey, it’s DISNEYLAND! I bought some sweets to enjoy later! 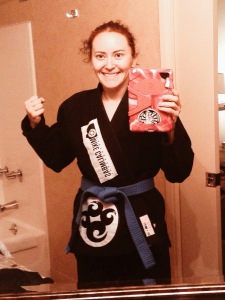 I got to meet Captain America and he gave me some very good pre-competition advice. He told me to not be distracted by other people, focus on the task at hand, and also to remember why I started this in the first place – which is because it’s fun and I love it. Oss Captain!

I stopped in at the venue on Thursday to check my weight on their scale and found myself still a pound over. So for the rest of the day I simply nibbled granola and sipped small amounts of mineral water. By morning, I was a half pound under by my scale – not even wearing my lightest gi, and as you can see by the photo, I was VERY happy about it. This is probably the lightest I have been since before puberty!

Making this weight was one of the toughest things I have ever done. I really don’t know how to express in words how it felt! My official weigh in was 128.2 lbs; 13 lbs less than what I have previously weighed in as, and about 18 lbs lower than my average walk around weight.

After I weighed in, my coach admitted to me that he didn’t think I would mentally be able to do the cut. Hearing that made me smile!

What About The Competition?

Right I suppose I should talk about the actual grappling portion of the competition! I had the luck of drawing my friend Taylor Biagi for my first match. We had both pegged one another as the person to beat in the division and it sucked that we had to meet up in an eliminatory match.

I lost the match, but it was awesome! I have no problem whatsoever admitting when I loose to a superior opponent, and Taylor is a most worthy adversary indeed!

Since I felt so good making the weight, I have decided to focus on keeping my walking weight down between 130 and 132. Worlds is just 9 weeks away and I feel like I am reborn and rejuvenated! I’m gonna shoot for a little lower of a weight so that I can finally wear my awesome Raijin Fight Wear Gi in a competition!

And now, here are some fun photos from the trip!

Popping by to make sure @greicedesa is running a tight ship for ladies classes while I recover. SPOILER: she is doing fabulously!