My family lives an hour from Boston and I decided that I would compete in the Boston Open so that my Mom, Dad, and sister would all finally get to see me compete!

I wasn’t sure how having them watching would affect me mentally. It could make me spazz out, or turn me into an absolute beast. Thankfully, it was the latter.

Weight Issues:
That was a pretty rough morning. I had a division of 12, set to start at 9:00. I brought a scale with me to the hotel and was fine that morning but got to the venue at 8:30 and discovered my scale was off by a lot… Meaning I had about 20-30 mins to cut just over 2 lbs.

I went to call my coach to ask him what I should do, only to discover my phone was missing. I was panicking on many levels. In the middle of this time, my family arrived and I told them I had to go cut weight and find my phone.

I gave myself a rather intense abdominal massage to help the colon do its thing, but that wasn’t enough. I determined I would have to puke as well. I nearly gave up then. At that point, my phone was found and I decided I was gonna make the weight if it killed me – if for no other reason, but for my family.

Weight Division:
I was supposed to have 4 matches, but my first opponent was over weight by a pound.

There were about three other people who were DQed for not showing up. I heard that there was some confusion as to he location for some. Anyhow, my next opponent was one of those. Sooooo… Pass into the semis. Sucks, but at least I could make up the matches in the open!

My first match (would have been my 3rd!) she pulled guard and I went straight to my cut through, passed, stayed on top, and Won 16-0. She had great defense and I wasn’t able to finish her. I’ve been working a lot on control from the top and it paid off at this competition for sure!

My second match was the finals. She definitely had length on me. I ended up in her closed guard but couldn’t reach her arms to do the open/pass I had been drilling. She bump swept me to mount and got the sweep and mount points before I was able to escape to my own closed guard. I was able to break her posture and finish with a cross choke in the last 30 secs of the match.

So that gave me a gold medal in my division. I registered for the open then ran out with the family to get some food in my poor empty system. 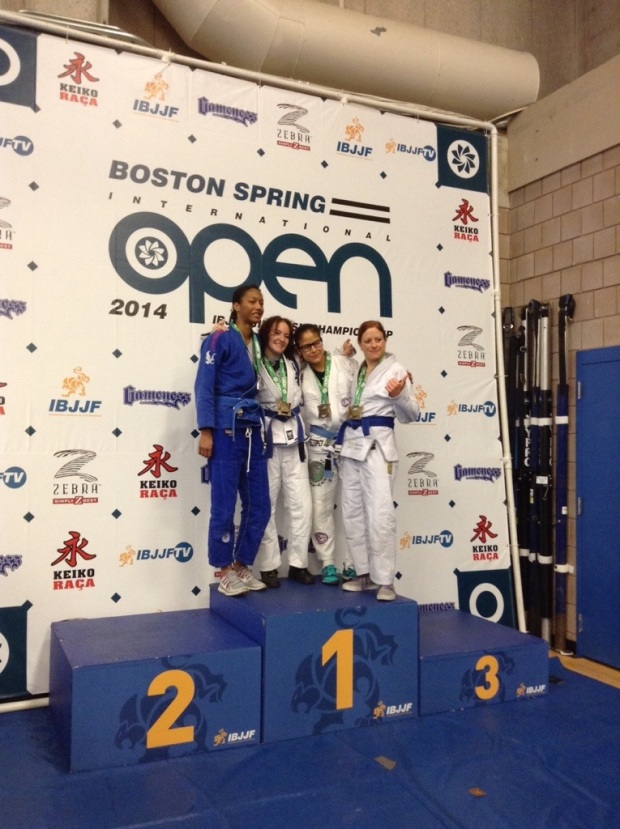 The Open:
My first match in the open was against a medium heavy weight (I think). I pulled guard when I felt comfortable, then went straight for the ankle lock for the tap about 30 secs in.

My second match was against another light weight – the only medalist I hadn’t fought yet. I did my snap takedown, got on top, smashed, and finished from the back with a loop choke variation.

My third match was the semi finals and I got to face off with a heavyweight. Let’s just say I got my just deserts for the crushing I was doing earlier. Ha! She had me crumpled up like a tissue and I couldn’t move worth a hill of beans. She won on points and consoled me with the information that I had frustrated her with my deep half guard sweep threats.

So that gave me a bronze in the Open. I take great pride in being the smallest person on the podium (I was wearing boots with two inch soles) 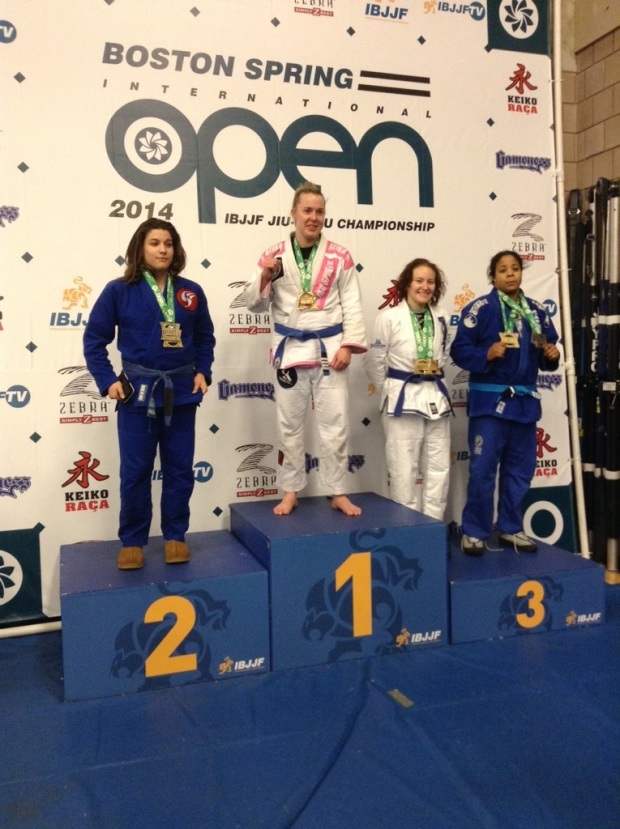 In Summary:
Rachelle came to compete as well and she did amazing! She gets better every competition and got on the scoreboard this time! Pretty soon she will be tearing it up as well!

I went out for food with the (very impressed) family after my weight division. My Mom had to go lie down at the hotel for the rest of the day because she was in a lot of pain (fibromyalgia and arthritis). She doesn’t travel very well so it meant so much to me that she was able to come! My sister stayed with her but my dad came back to cheer me on in the Open.

I was asked to help out working at the podium for a few hours, so I directed traffic, answered questions, and handed out medals for a couple hours. They paid cash at this competition so my food budget was restored.

What’s Next?
I’m back to the grind this morning. The New York Open is this weekend and winning it will put me in the top three of my division – so I guess I had better win it!

I’m really excited because the guys at Raijin Fight Wear have been teasing me with a new item design that is top secret – and a surprise for me. I should get to see it soon and it feels like waiting for Christmas!

There are just about 7 weeks until the IBJJF World Championship, and I just can’t wait! Looks like I will be the only person from my school going, so I’m considering going to Philadelphia the week before so that I can train at the TAC Team headquarters school for a bit. We shall see! 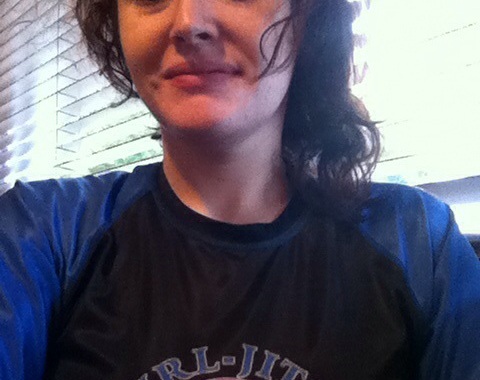 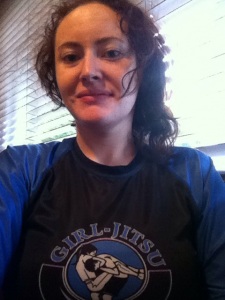 I suddenly realized while preparing for the Chicago Gi/No Gi tournament, that I did not have a ranked rashguard! So I set out on the hunt for one ASAP!

I decided on the Girl-Jitsu Ranked Rashguard for the simple reason that they sponsor several of my friends. If they are going to support my friends, I’ll support them in turn!

Preamble aside, I decided that they deserve a quick review since I have received quite a few questions about it already!

Delivery was freaky fast! In less than 5 days I had it in hand! I have ordered a second one since that first order, and it was just as fast the second time around.

This was my first official Jiu Jitsu rashguard because, hey, I didn’t really need one since I wasn’t participating in any IBJJF No Gi tournaments as a lowly white belt. As a blue belt, a whole new world of No Gi, wrist locks, and absolute divisions was opened up to me!

I was astounded as to how silky and light it was! I didn’t even want to take it off once I tried it on the first time! The sleeves are 3/4 length and I was surprised that they were a fairly loose (unlike my skin-tight underarmor!) the “Pretty. Tough.” lettering on the left sleeve was a really nice touch! The little things such as the contrast stitching along the bottom show that this rashguard was designed with care. I got quite a few compliments on the look of it at the Chicago Open.

Sizewise, I’m 5’3″ish, typically a size 4 (USA) waist, and the small fit me perfectly. I’d say if you’re lightweight or under, you’d probably fit a small as well.

The cost was $42, which having never purchased a rashguard before seemed a good chunk of change to me, but after comparing prices with the larger companies it’s actually a bit cheaper. I could tell at first touch that they did not skimp on quality in the slightest either.

So ladies, support the company that supports you! I highly recommend it to every female Jiu Jitsu’er out there!

I think I’m going to be turning into a rashguard hoarder – already showing the signs. I’ll review each one and eventually learn to compare them properly! So far my collection is:

Side note: the reason I had to purchase a second Girl-Jitsu rashguard, is that my first one magically disappeared. On the off chance that it didn’t show up in time for Pan Ams, I figured I would be best off getting another one. Good thing too since it has now been missing for two weeks. Wherever it is, I hope it is happy! 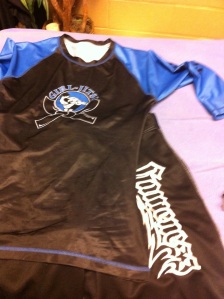